Clean Eating and The IBS Diet

Cramping, aching and nausea. That is what I experienced from the moment I woke up this morning through the entire workday. If you have IBS, you already know that dealing with it, especially when you aren’t at home, is just the worst.

This morning I was given a painful reminder of just one of the reasons why we started the Clean Eating Diet. Read on to find some of the symptoms and some foods that will help you answer that popular question…How do I manage IBS symptoms?

Not sure if you have Irritable Bowel Syndrome? THIS LINK has great info on the signs and symptoms.

The first time I went to the doctor for Irritable Bowel Syndrome (IBS), I actually thought I might be pregnant! My lower stomach felt like someone had punched it and I had a constant ache for days. I was constipated and nauseated.

Anytime I ate, I felt queasy 5 minutes later. I was miserable. The doctor first diagnosed me with IBS in 2010 (right smack in the recession) when I was going through a very stressful time in my life. We had a baby at home and at the same time work had announced a merger, meaning we didn’t know who was going to keep their jobs.

I wasn’t paying attention to stress because I thought I was managing it. Over the years I have identified stress as a trigger for my IBS. Though IBS triggers are different for everyone, stress is a common one.

I should also note that some people experience diarrhea rather than constipation.

What to Eat for IBS

The good news is that if you are already Clean Eating, your symptoms are likely controlled most of the time. Since we have started eating Clean, my IBS symptoms only bother me maybe 2-3 times a year. And each time I could tell you why.

Last night we picked up Teriyaki Chicken with white rice. While that isn’t typically a problem. we also ordered a plate of teriyaki vegetables which ended up being a head of cabbage sauteed in lots of oil. As I ate it, I knew I would regret it.

But I did it anyway. The cabbage coupled with the oil and White rice was enough to trigger IBS. So let us start with foods to avoid with IBS:

Here are some food to avoid if you suffer from IBS: 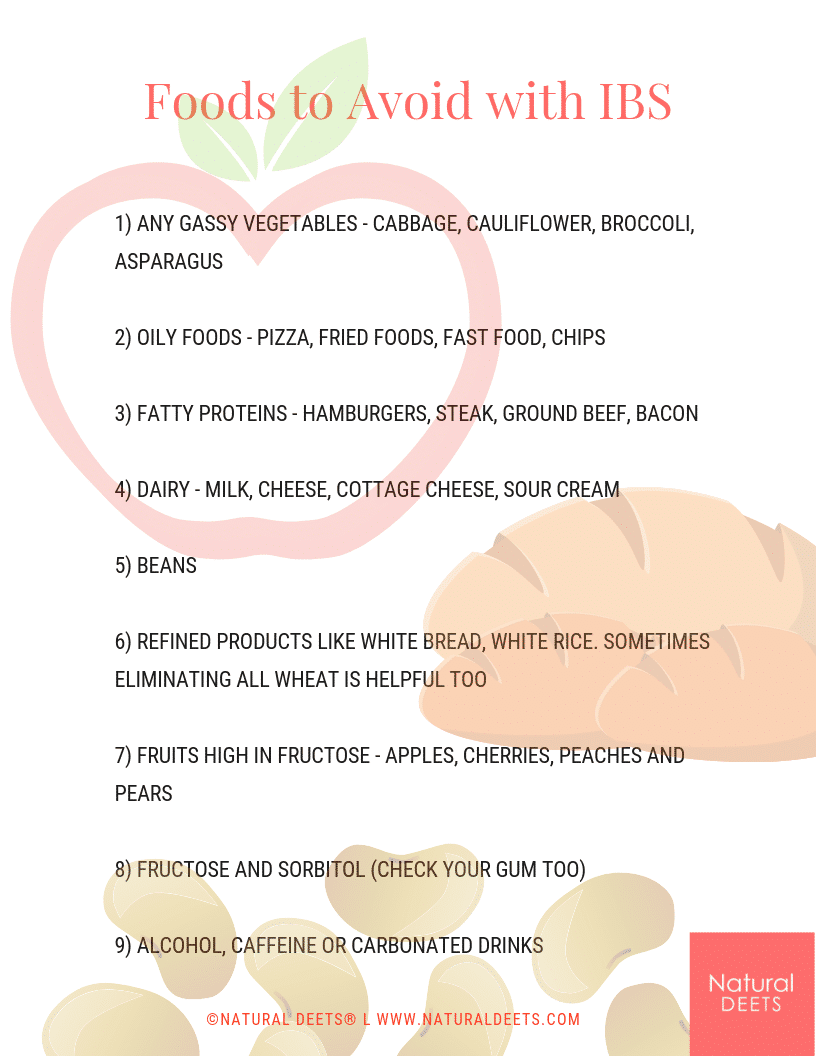 Now the fun part. What you CAN eat!

What to Eat on the IBS Diet?

Fortunately, there are a lot of foods you can eat on the IBS diet:

IBS At Work – Eating Out With IBS

IBS at work can make you paranoid about eating just about anything. Here are a few lunch ideas on the IBS diet that you should be able to find at a cafe, coffee shop or restaurant.

How Long Does it Take for IBS to go Away?

An IBS attack can last 2-4 days and sometimes even up to a week. That doesn’t sound like a long time but for someone suffering from IBS, it can feel like it is never going to end.

How long you will be symptom-free between attacks will vary from person to person. It is unknown what causes IBS and it is thought to be genetic.

I know from experience that diet, stress, and hormones are all contributing factors for someone like me who is prone to IBS attacks. Clean Eating, probiotics, and exercise are all things that help me. But it has taken many, many years to figure that out.

In the end, IBS sucks. There is nothing fun about it and it can cause stress and anxiety when you have to leave the house during an episode. Irritable Bowel Syndrome can be managed with Clean Eating, but sometimes there are reactive foods that are specific to your body.

If you are experiencing frequent episodes, talk to a doctor and see if there is something else going on.

Preparing for a Meat Shortage While Clean Eating

Safer Cookware Options – The Only 6 Pots...

How To Use An Instant Pot – Keeping...

Plant Based Protein For Smoothies

How To Get Kids To Eat Vegetables –...

Your Gift Guide For the Farmhouse Kitchen!

Came across this when searching for Digize uses with kids. I just ordered my first YL set. I am getting the oils after learning about how to use them for regulating/supporting my hormones and other systems. I suffer from self-diagnosed IbS and am facing the road of trying these oils and a low fodmap diet to figure out what all my triggers are and hopefully get relief. IbS has been pretty life altering for me especially now with 3 kids. I have to try something!

I hear you, IBS really is life-altering. It is one of the things that sent me down the clean eating path. I hope you find some relief and that the Digize helps!

Hey, I'm Kim! Natural Deets is a place designed strictly for busy moms. We have clean eating recipes, ways to get your kids into the kitchen and meal planning ideas. Many moms I talk to say that they struggle with cooking healthy because of time. But what they really mean is they don’t want to have to choose between spending time with their kids and cooking. I mean, they only get 2-3 hours a night with their kids. We find a way to do both, by cooking with the kids and meal planning. Have a look around!