Spooky, Scary, Skeleton! Get inspired by these easy, clean and delicious Halloween Cookies! Not only are they fun to make, but these Halloween cashew cookies are healthy too (and Gluten free)!

And these are clean eating compliant and kid friendly too! Whoop Whoop!!  This kid-friendly recipe is fun for the whole family! From start to finish, it only took about an hour. Double the recipe if you are going to share with the kids! 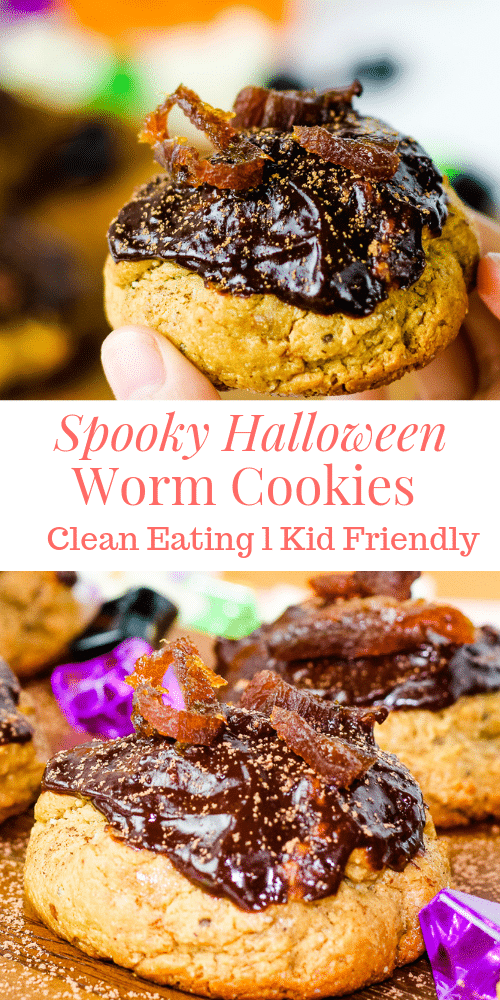 We used a blend of Almond Butter, Cashew Butter and just a little Almond Flour, so these cookies are dense and satisfying! I hate ot use ethe word dense because I know it isn’t appetizing…but these are dense in the best way! I promise…

When we were setting up the pictures with popcorn, we also figured out that oddly enough, these halloween cookies also taste delicious with popcorn! I can’t make this stuff up!

Halloween parties can be one of the most fun and exciting holidays to cook for! There is less pressure for perfection, and if your dish doesn’t turn out Pinterest worthy, you can play it off as being intentional!

However, it is also the beginning of the indulgent season. Cookies, cakes, sugar laden drinks and cheesy meals. Just one more reason to stock up on Healthy Halloween Party Recipes! This Healthier Halloween Cookie is awesome too! 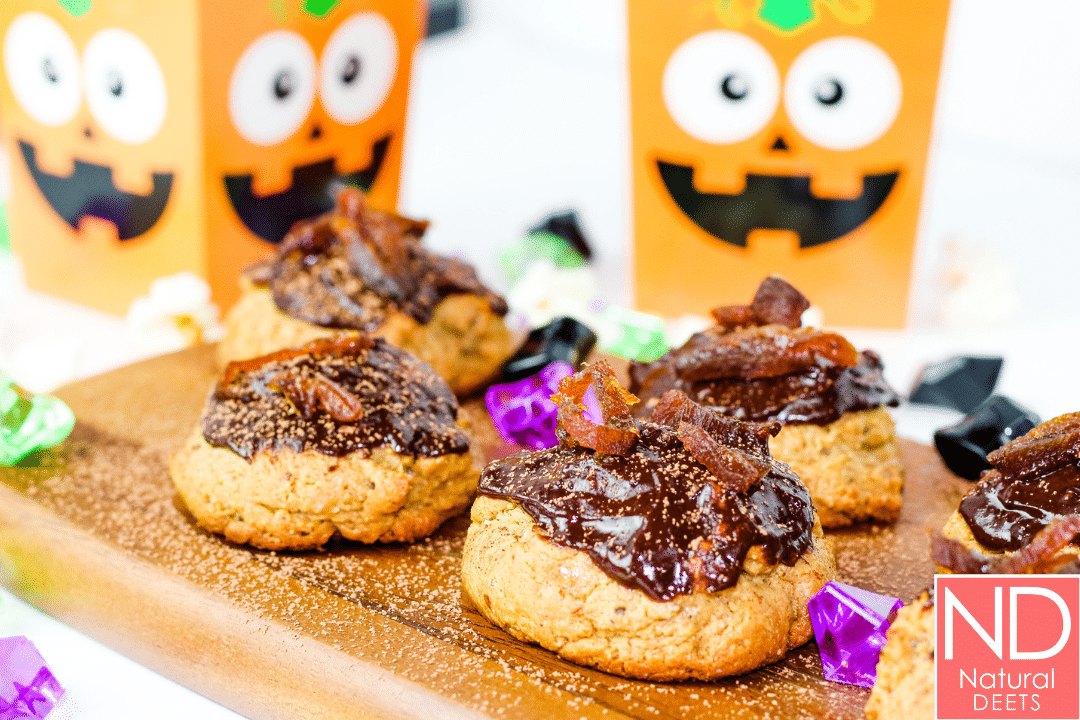 This recipe is healthy, with no refined sugars and a chocolate sauce made with cocoa powder! It is sweetened with honey and sliced dried apricots. Serve it to the kids without the fear of a sugar crash too!

Can You Bake With Almond Flour?

Yes! I talk about it a little bit in my post about Clean Eating Flours, but Almond Flour can be baked with! However, it is not a 1 to 1 substitution and it requires a little tweaking, but it can be done!

I wish I could give you more specifics on how to substitue it, however I have found that it depends on what I am making. Because of that, it takes a lot of trial and error. If you are not up for the challenge, just find a recipe for the dish you are making and save yourself lots of time! 🙂 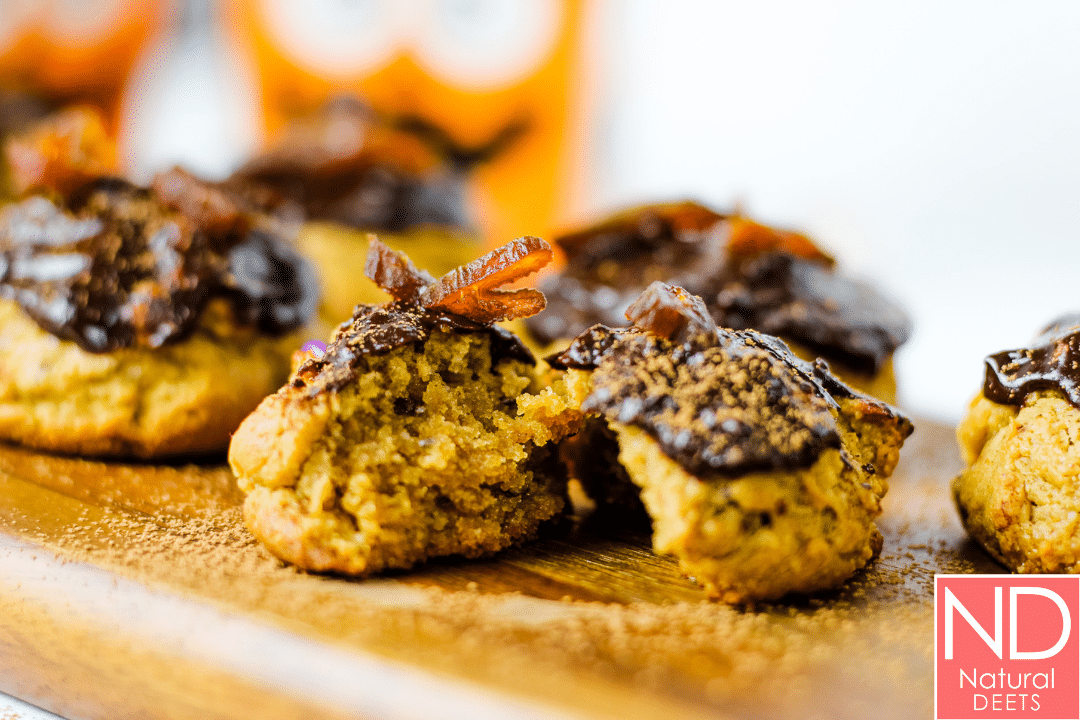 In these cookies we only used 1/3 cup of Almond Flour and it was perfect.

Is Almond Meal The Same As Almond Flour?

No it is not! And when making baked goods, you really can not substitute almond meal for almond flour. Almond flour needs to be fine and closer in texture to wheat flour.

When buying almond flour, be sure to buy blanched almond flour. This means the almonds are first blanched to remove the skin. From there, it is finely ground into flour. If you use unblanched almonds, you may see specks of skin which will show up in your baked goods.

Almond meal is coarsley ground almonds. My favorite was to use it is as a coating on fish or chicken (like chicken nuggets).

Costco sells almond butter in bulk, so is my default nut butter. However, in this recipe we also added Cashew butter just to mix it up a little! Here is just a little bit about the nut butters used in this recipe:

Almond butter has a little less protien than peanut butter, but it is a fantastic source of monosaturated fats, which can help with weight loss, heart disease and reducing overall inflamation.

Nutritionists claim that it is high in Vitamin E, magnesium and potassium. No wonder we add it to everything! Make sure to use an organic almond butter when possible (especially if you eat it every day), as almonds are known to be sprayed with toxic pestisides.

Cashew butter isn’t talked about as much as other nut butters and I think it is becuase it is harder to find. Now that it is showing up in grocery stores, it is so expensive for a small bottle!

That is just one reason why we mixed cashew and almond butter in this clean eating recipe. Cashew butter has up to half the sugar as peanut butter and is high in copper and magnesium.

When my daughter was in Kindergaten, she had her first Halloween class party. We all had to bring in a treat and I had no idea what to bring. What I did know was that the kids in her class liked to bring sugar laden foods!

So we tried to find something that was healthy but still fun and Halloween themed…without being scary, of course! 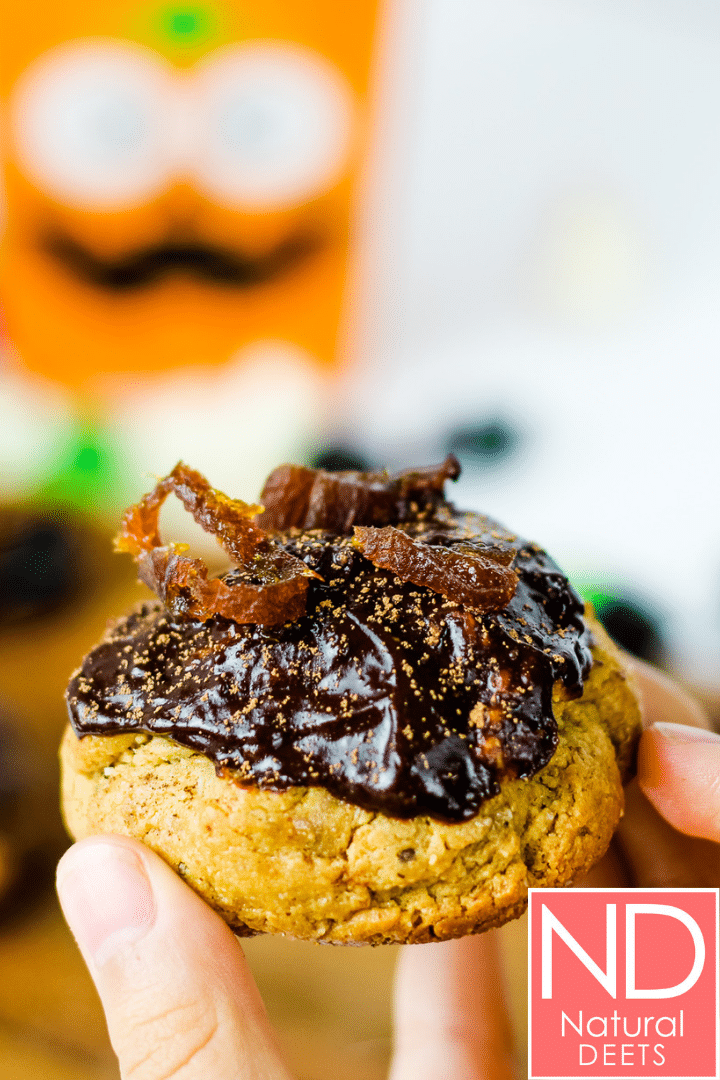 If only we had this recipe back then…it would have been our go-to! For this recipe, the kids wanted to make worms! So we thinly sliced dried apricots and sprinkeld them on the cookie.

But there are so many other “healthy-ish” options that could work as well! Here are just a few ideas:

This is a general question since there are so many different types oc cookies! But I can definietly show you how to make these delicious and healthy Halloween cookies!

Step 2: Mix all the ingredients using a hand mixer. You want to use a hand mixer becuase it needs to be smooth. With all the nut butters, it is difficult to get a creamy consistency if you do it by hand 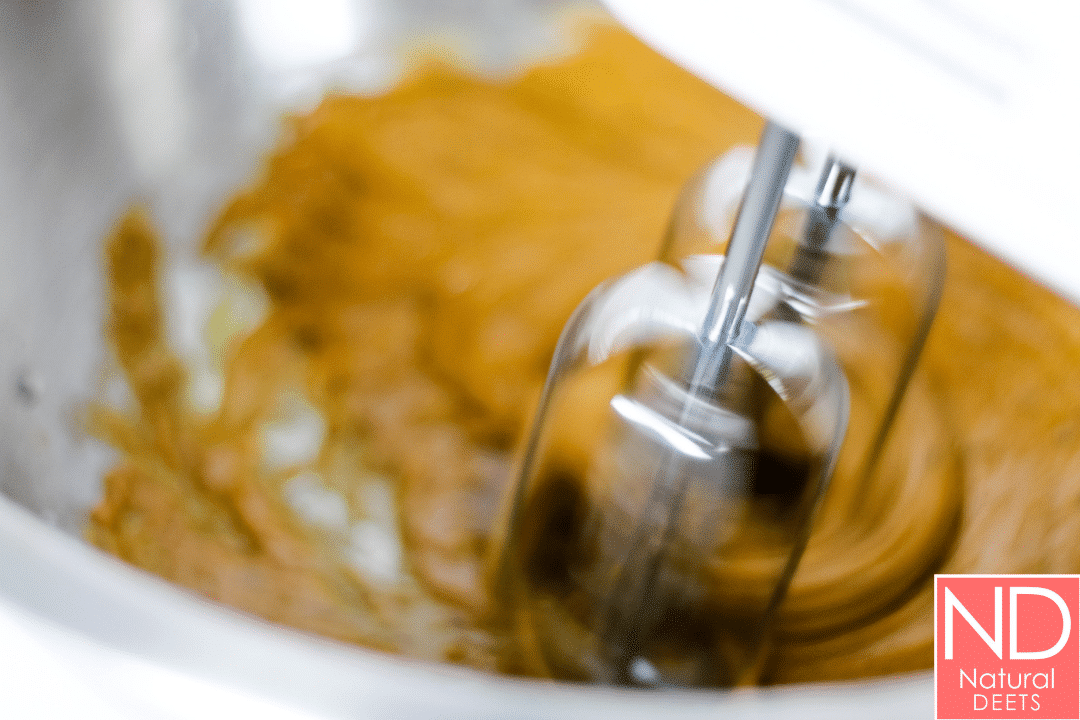 Step 3: Line a baking tray and use an ice cream scooper to scoop out blobs. There is no need to flatten them, since they will not spread while baking 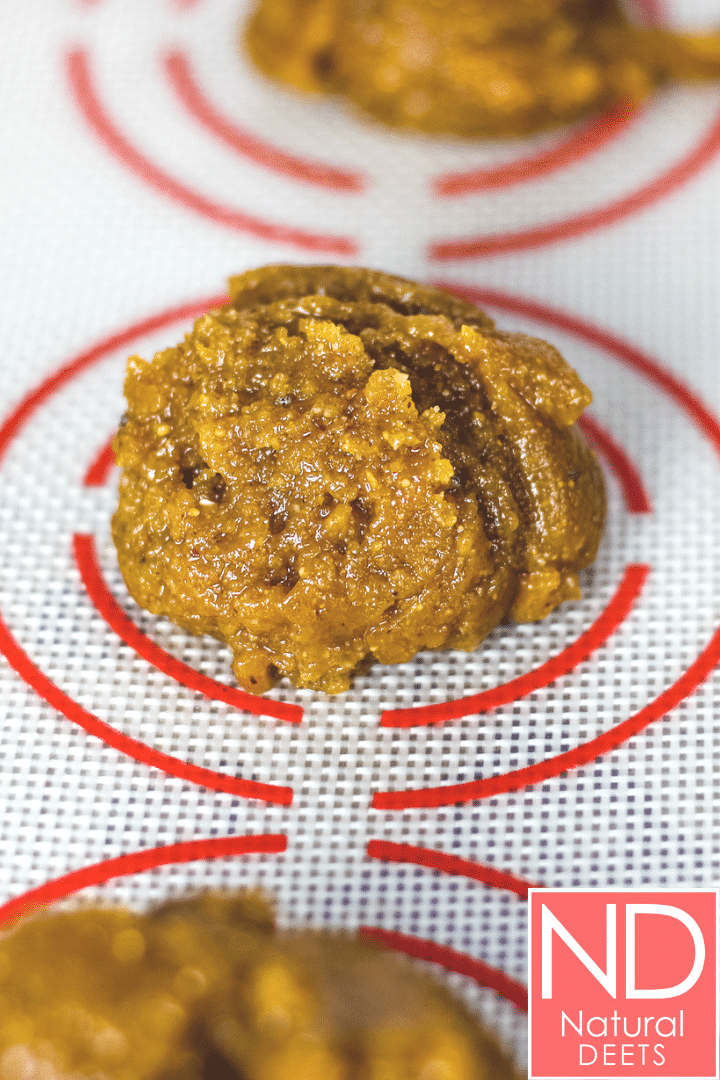 Step 4: Bake in the Oven for 14 minutes or until cooked. It won’t brown like a traditional cookie so you will want to make sure not to overcook them. I’m giving you an excuse to try one 🙂

Step 5:  While the cookies are baking, make the frosting. In a bowl, mix the cocoa powder, almond milk, almond butter and honey until smooth. You can use a fork or whisk for this part. 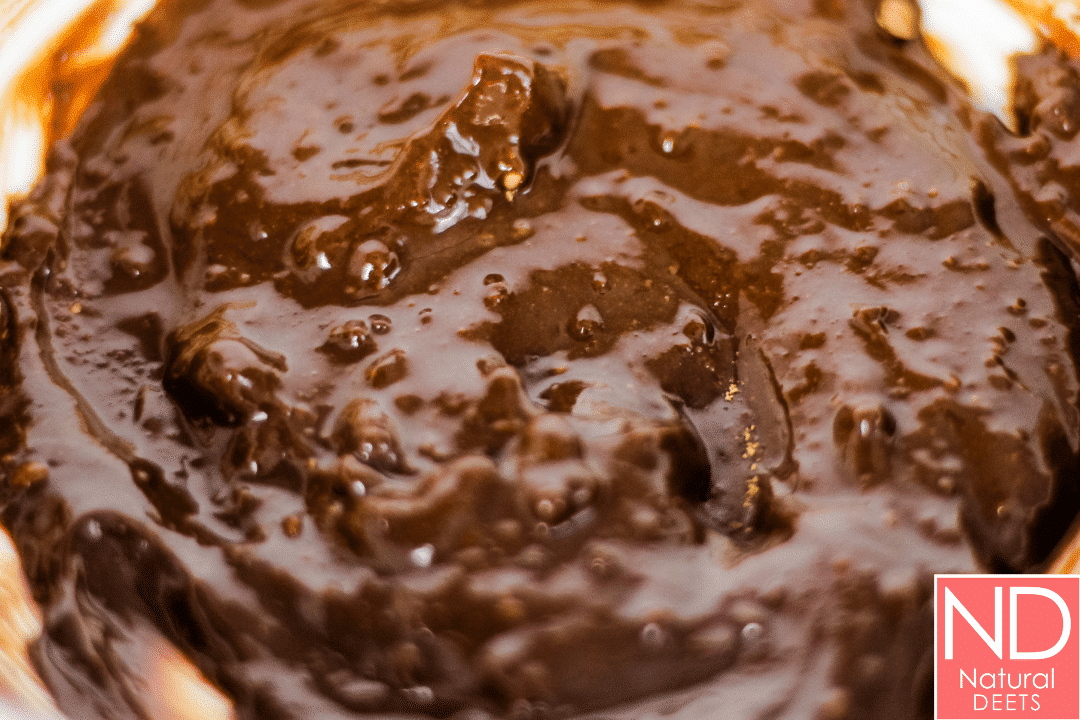 Step#6: Once the cookies have cooled, frost them with a spoon or knife 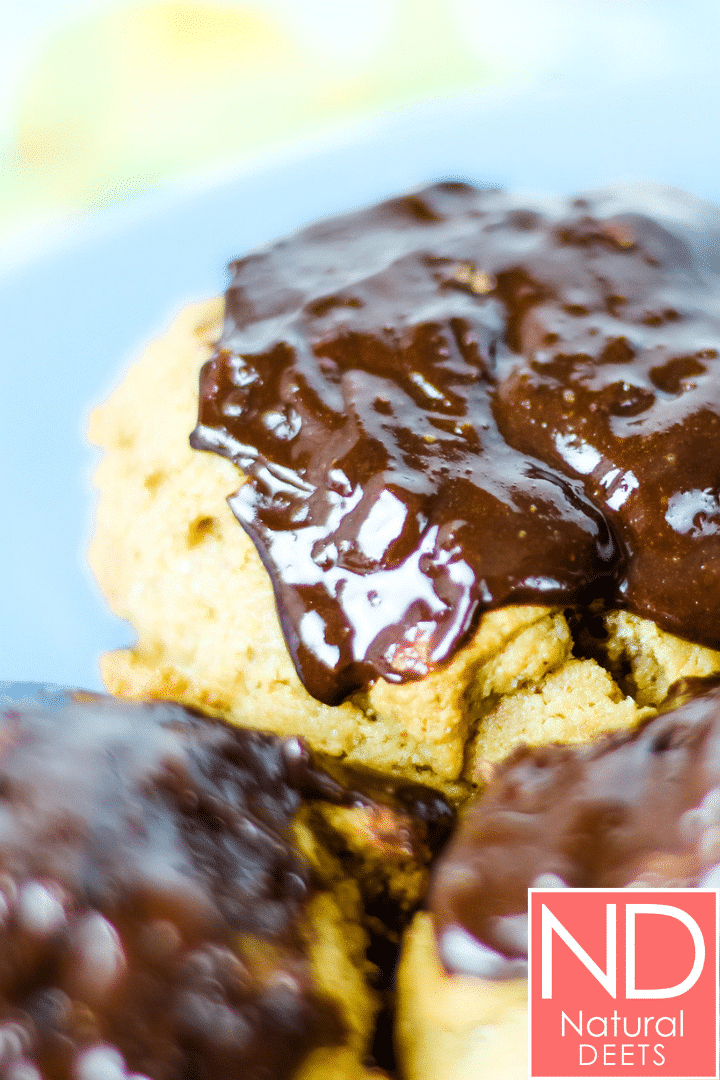 Step #7: Thinly slice some dried apricots and sprinkle them on the top of the cookies. Share and enjoy! These are so delicious that you may need to double the batch so you can have some too!

As always, grab the kids and get them involved! Here are just a few things they could learn from making this recipe with you!

Healthy Halloween Party Food For Kids – Make it A Party to Remember! 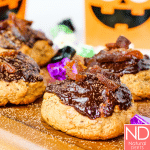 These cashew cookies are perfectly scary for a Halloween party but are also a delicious any-time snack! Double the batch if you are planning to share with your kids!

Chocolate Banana Smoothie That The Kids Will Be Begging For!

Plant Based Protein For Smoothies

Does anyone really like the taste of protein powder? I mean, really? It has gained popularity over the END_OF_DOCUMENT_TOKEN_TO_BE_REPLACED

How To Make a Smoothie For Kids (Picky Eaters!)

How do I make a smoothie? This is a common question from readers, but it is so broad END_OF_DOCUMENT_TOKEN_TO_BE_REPLACED

Any one with kids knows that they won’t eat something just because it is good for them. It END_OF_DOCUMENT_TOKEN_TO_BE_REPLACED

There is just something about eating sliders that fuels the air and amps up the party! Is it END_OF_DOCUMENT_TOKEN_TO_BE_REPLACED

Do you struggle between spending time with your kids and finding time to cook healthy meals?

What if I told you that bringing your kids into the kitchen for some added quality time while teaching them to cook can be fun and not stressful?

I've been doing this for years and would love to show you how!

Natural Deets is your go-to community for inviting your kids into the kitchen! 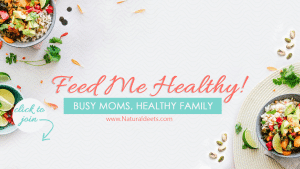 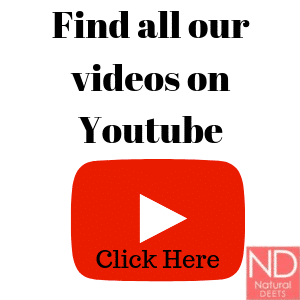 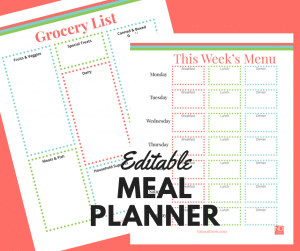 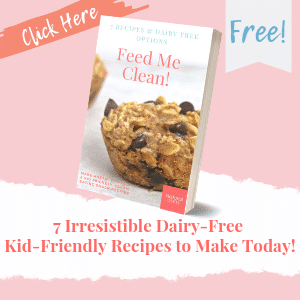 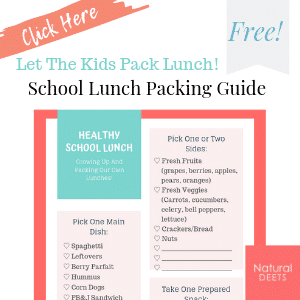 Natural Deets is a member of the Amazon Associates program and as an Amazon Associate, I earn from qualifying purchases. However, all opinions and recommendations are my own and I will only recommend products I have tried and enjoyed!